When ITC Vivel invited me to cover their sessions at KLM, I was delighted. The theme was Women and Words. From 26th Jan to 28th Jan, I listened to, talked to, asked questions, and witnessed amazing women talking about their work, the place they occupy, their methods, and stories of other great women.

Listening to Chitra Banerjee Divakaruni was a delight.

Her working process of writing female choices was giving them autonomy. A perspective where they make their own choices. Stories she said were made to read by intelligent men and women. In her career spanning decades, she has placed women at the centre of narrations. And then seen them rise, especially in difficult situations. She talked about being inspired by women who were migrants and those who belonged to minorities. She knew they had stories to tell.

Even more incredible was knowing how she started writing for children. Post 9/11, she knew she had to do something to encourage more cross-cultural understanding, and that’s what she did.

She was at that time, writing Ramayana, from the point of view of Sita. A single mother who raised her children, after becoming a tool of the patriarchy. And how her courage shined through.

The next session was Women’s Lives Matter with Ashley Judd and Ruchira Gupta in conversation with Sagarika Ghose.

Everything from the women’s march, to feminism, to flesh trade, to sisterhood, nothing was off topics. Ashley talked about the necessity to be a nasty a woman; a woman who believes in equality and would fight for it. She pointed out how men are allowed redeemable moments, a privilege hardly ever extended to women.

Sagarika Ghose talked about the backlash the rising wave of feminism is facing. How men are being threatened by affirmative action by women fighting for equality, and I couldn’t do anything but nod in agreement, having seen this myself.

But amidst all this, there’s still hope. Just like Ruchira Gupta and Ashley Judd talked about the rising wave of justice. How the revolution is upon us. And how the strength of friendships between women, the sisterhood, the allyship, continues to empower women.

It was amazing for Ashley to also answer my questions so eloquently and beautifully. I had the pleasure to meet her again when I visited Bihar and the NGO she’s a part of, Apne Aap, where excellent work is happening to rescue and rehabilitate human trafficking victims. 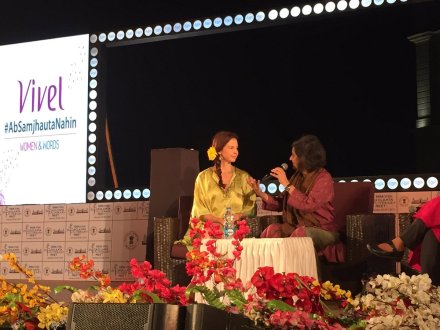 The first session for that day was with the cast and creators of the film Pink, which essentially was made to sensitise the viewers to women’s rights and dignity.

We had Andrea Tariang, the actor, the writer Mr. Ritesh Shah and the director Mr. Aniruddha Roy on the necessity of making Pink.

Andrea opened up about why she took the film. She said it’s because women already experience what happens in the film. And it was a reality people really needed to see. She also opened up how representation is important. She said “there aren’t many women from North East who get a chance to play a lead role in Bollywood. I was proud to do that.”

The writer and director also talked about the work they put into it, for it to remain relevant yet authentic. A film that truly was needed to be made. As a wake-up call to many.

Andrea had an important message for women. Watch it here.

Our next session was Inheritance and Influence. Anita Desai and Kiran Desai discussed the joys of having two writers in the family.

A discussion that encompassed a myriad of topics and gave us a glimpse into the world of Desai writers. Kiran Desai talked about how she’s a product of great journeys and great displacements. Anita Desai then went on to tell us how her mother is such a great storyteller, and so vivid and alive her stories, that one could adopt her memories as their own. An entire session filled with warmth, stories, and insight.

The session for this day was: Mother Tongues – on how stories of women unite various parts of India

This was by far, the most enriching session of the festival for me. Three incredible feminist poets who truly left me awed.

We had Paramita Satpathy, Volga, and Joya Mitra talking about the forgotten stories of women before us.

Paramita Sathpathy is a Sahitya Akademi awardee, her work is translated into many languages, and she’s a force to reckon with. Volga is a firebrand, a Telugu feminist poet, who’s also a Sahitya Akademi awardee. Her perspective on women, stories, feminism, and sisterhood were truly lessons for us all. Joya Mitra is a political writer and was even imprisoned for her fiery writings.

Volga started off by talking about how women writers have been forgotten for the last five hundred years. How they’ve been invisible. But that they were always there. They’ve always been writing their stories. How women always occupied space that went unacknowledged. But it was in the 80s when feminist writing came and women began to reclaim their space. She explained further by pointing out how a man’s gaze for men desiring women and vice-versa was recognised but a woman writing about it was called vulgar and knocked down.

Paramita added finally how women in the 80s moved beyond blameless topics and began to explore other expressions – like owning their bodies and their sexuality.

Joya Mitra spoke about how women observe family members more intimately than a man because they have to deal with realities daily. And how their writings reflect that. And how when women write about women, their characters become more autobiographical, because they write from a woman’s gaze.

Volga passionately discussed the importance of translating work of women who came before us and left us with such important legacies. She said, “when translations of the literature of regional women writers of yesteryears will be available to us, India will humanise herself”.

Paramita Satpathy had a very important message for the younger generations: we need more biographies of great women writers and poets. Watch it here.

The culmination of the entire experience was the wonderful video that Vivel did with some of the amazing women at KLM – an interpretation of freedom.

I’m glad Vivel was part of something so authentic and necessary, and that I was included in this beautiful experience of interacting, talking, listening, and learning from such amazing women writers, poets, and activists.

Timezones is a part of my Typewriter Series. It is typed on a vintage Remington Two Forty.

Romancing death was easier than I thought;
He smiles and asks if I am afraid,
I laugh in response.

You smell so nice, he says to me;
I nod my head and tip my hat.
He asks me to come, and I am early.

I wear my Sunday clothes
’cause you bid goodbye in style.
There was never a moment this alive.

You’re like half-forgotten dreams,
and the perfect colour of night turning to light.

The time of restlessness and recklessness,
when pain is inconsequential and unimportant.

It’s like the moment after the laugh dies on the lips,
or just the beginning of a smile.

The tilt of the head, considering,
when the air is heavy with uncertainty.

I’m like a grave, newly dug open,
with sun shining, like on the first day of summer.

Place roses on my grave, decide now,
or come, lie here with me.

I wore rounded shoes on a square tiled floor and tried to avoid the lines but I almost always never won.

I saw the floating cloud, so perfectly suspended like newly washed linen on a hanger, and I played games, made up.

I spoke too quickly, too loudly, always honestly. When no one was around.

I had these great conversations, in my head; with a different person everyday. You see, I quickly changed.

It wasn’t easy making friends, but it was harder still, to keep them. And that was a harsh lesson to learn.

I was not a genius, but I was good at a lot of things. And I found out, good was never enough.

I was neither sad, nor happy; I wasn’t lonely, although often I was alone.

I noticed peculiarities, and stared too long. Maybe, maybe everyone thought that I was finding faults. But I always looked in wonder.

I was a misfit. And I just wanted people to see me for who I was: A girl trying to fit in. 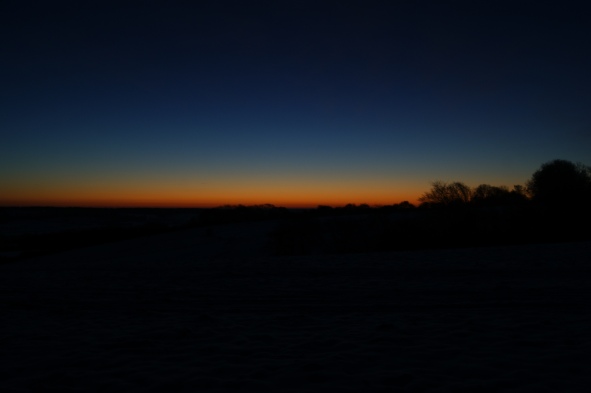 I’ll think of you as the stars start to fade,
as the moon wanes

I’ll think of you in half a light,
because you’re all the brightness I need

And when the candle burns out,
the old, wooden, rusty table
will bear witness to the time I thought of you
Used and beaten, like burned with anger

And my brooding eyes will face the ceiling,
burning with questions, always burning

Afraid to hold you, afraid to let you go,
even though you’re only in my thoughts
An empty room

I’ll think of you as the dawn breaks,
you’ll rise with the sun

In my thoughts, you decide to stay

They asked me why do I write? I kept silent not because I didn’t have an answer but because I had too much to say. I write because I don’t know there is a life possible without it, I write because I don’t know how to live without writing. Because it seems like the most natural thing to do, like my hands were made to hold a pen and rest it on a page and scrawl words across it. Painting the page with ink and shapes. It brings out the best in me. And, it reminds me who I really am; just a girl who wants to write.

This great urge to write; it is both a curse and blessing at once. It’s like a prison with no lock. You’re free and bound at once. A paradox really.
I write because, for me, it’s not a part, but a way of life.
I write because I have to. Because the need is greater than almost everything else. And this need presides over my life.

A crisp white page would have your name
written on top with my favourite ink
And I’ll gently caress it, afraid to read aloud
Tracing the words, imagining your face

I’ll write you this letter that you’ll never see
Just like you went your way,
hardly sparing a careless glance

I’ll write you a letter but you’ll never know
because I’ll realize, all this while it was for me
And as the ink flowed,
I could see how much I needed this

The letter, I’ll keep it with me. 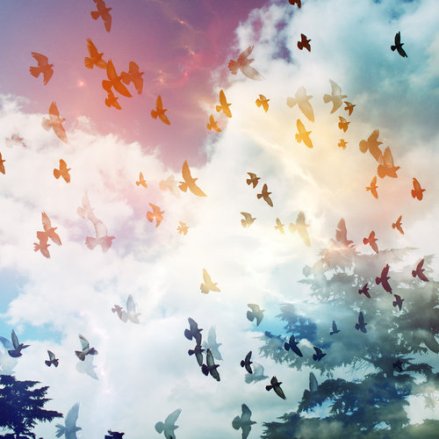 Home is where someone protects your heart. Where you can wear your heart on the sleeve. Where you laugh louder. Where sadness doesn’t mean fear. Where you have the freedom to enjoy the pain, to cry. Where a hug is never far away. Where you learn what love means, better than any dictionary can teach you. Where you have your own space but no need of hiding.

Home is not a place.
It is a feeling.
Of being free.